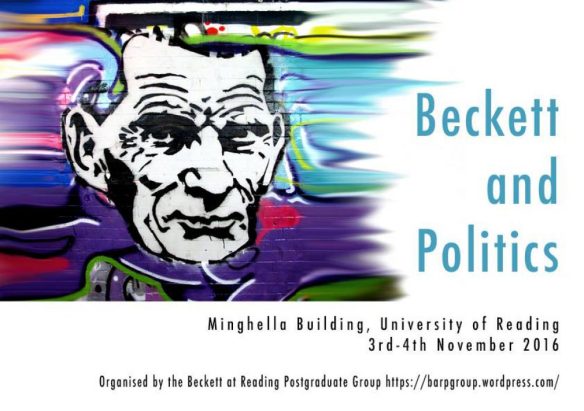 The provisional schedule for the conference can be found below:

Samuel Beckett is often hailed as the epitome of the ahistorical and apolitical writer. His work has been characterised by a poetics of ‘impotence and ignorance’ that makes use of aporia, silence, indifference, resistance to narrative and a disconnection from contextual time and space. However, to what extent has the political nature of Beckett’s aesthetic been overlooked?

Throughout his life and career, Beckett encountered an exceptional range of extreme political ideologies in Twentieth Century Europe. His background as an Anglo-Irish Protestant in the Irish Saorstat, his documented wandering through Nazi Germany in 1936-37, his decision to leave neutral Ireland during World War Two and subsequent role in the French Resistance, his encounters with Irish and British censorship throughout his career, and his support of political causes throughout his writing life such as anti-apartheid in South Africa and the imprisonment of Václav Havel all suggest that the politics of Beckett’s biography and writing is a ripe area for discussion. The various modernisms that emerged in Ireland, Britain, France and Germany also heavily influenced Beckett as a young writer, however, the political aspects of artistic movements in the Twentieth Century have yet to be wholly accounted for in terms of Beckett’s works.

Given that Beckett resisted the ‘neatness’ of political and historical identification, to what extent has scholarship been influenced by Beckett’s own statements? Following on from Peter Boxall’s call to reassess the limits imposed upon Beckett’s work by the ‘overemphasis of his political neutrality’ (2002), the political context and value of  Beckett’s works has become an important question in Beckett scholarship. However, this is an area that has yet to be fully explored. Scholarship such as Séan Kennedy’s edited volume Beckett and Ireland (2010) and the Historicising Modernism series has shown the value of combining conceptual and contextual approaches as well as indicating the necessity for further consideration of the methodologies used in Beckett criticism.

Beckett’s aesthetic representation of disabled figures, failure, violence, gender, poverty and voicelessness all suggest the possibilities of a fruitful engagement with many strands of current political and critical theory. In connection, Beckett’s appropriation into  advertising promotions and protest theatre also raises specifically contemporary political problems, as does the role of government and institutional funding in the study of Beckett’s work. How then might we begin to consider Beckett’s work to be political and what problems are brought up by the possible rejection of the political in his work? Is literature always in some sense political and in relation to this is interpretation always political? How can we read the nuances of the political and critical difficulties present in Beckett’s work? How do such considerations contribute to wider inter-disciplinary studies of Politics and Art?

The Beckett at Reading Postgraduate and Early Career (BARP) group are pleased to announce their second international conference hosted at the University of Reading. The conference will address the theme of ‘Beckett and Politics’ with the aim of exploring and exchanging new scholarship in this understudied area of Beckett’s life and writing.  The conference will be a part of the ‘Beckett Week’, organised by Beckett at Reading and the Beckett International Foundation, with public talks, an event commemorating Mary Bryden and a Billie Whitelaw exhibition.

The conference committee welcome submissions from scholars from all disciplines, with a particular emphasis on encouraging the participation of postgraduate and early career researchers. Papers of no more than 20 minutes on topics related to Beckett’s work may include, but are not limited to, such areas as:

Please send anonymised abstracts of no more than 300 words and a separate biography of no more than 150 words (.pdf or .docx), and any informal inquiries, to barpconference@gmail.com by the 22nd July, 2016.

Accommodation and travel advice can be found at the link below:

For any enquiries please email barpconference@gmail.com